Prevention and Suppression of Money Laundering and Terrorist Financing Seminar

The European Institute of Management and Finance is organising an AML course that will analyse the set standards and disciplines emanating from the regulatory and legislative framework in Cyprus pertaining to the Prevention and Suppression of Money Laundering and Terrorist Financing.

This course is Certified for 6 Units by the Association of Certified Anti-Money Laundering Specialists (ACAMS),  the largest international membership organization dedicated to enhancing the knowledge and expertise of financial crime detection and prevention professionals.

What will you learn

• Understanding money laundering and terrorist financing, and the sanctions against said practices

• How financial Institutions are vulnerable to money laundering and terrorist financing

• Case studies from Cyprus and Abroad

If you need help completing the online registration form, please give us a call at 2227 4470 or email us at info@eimf.eu 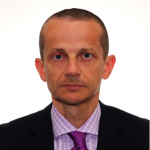 He started his career from Citibank Athens, where he worked from 1994 till 1997. From 1997 till 2012 he worked at BNP Paribas Securities Services Athens, initially as Head of Securities Operations and then as General Manager.