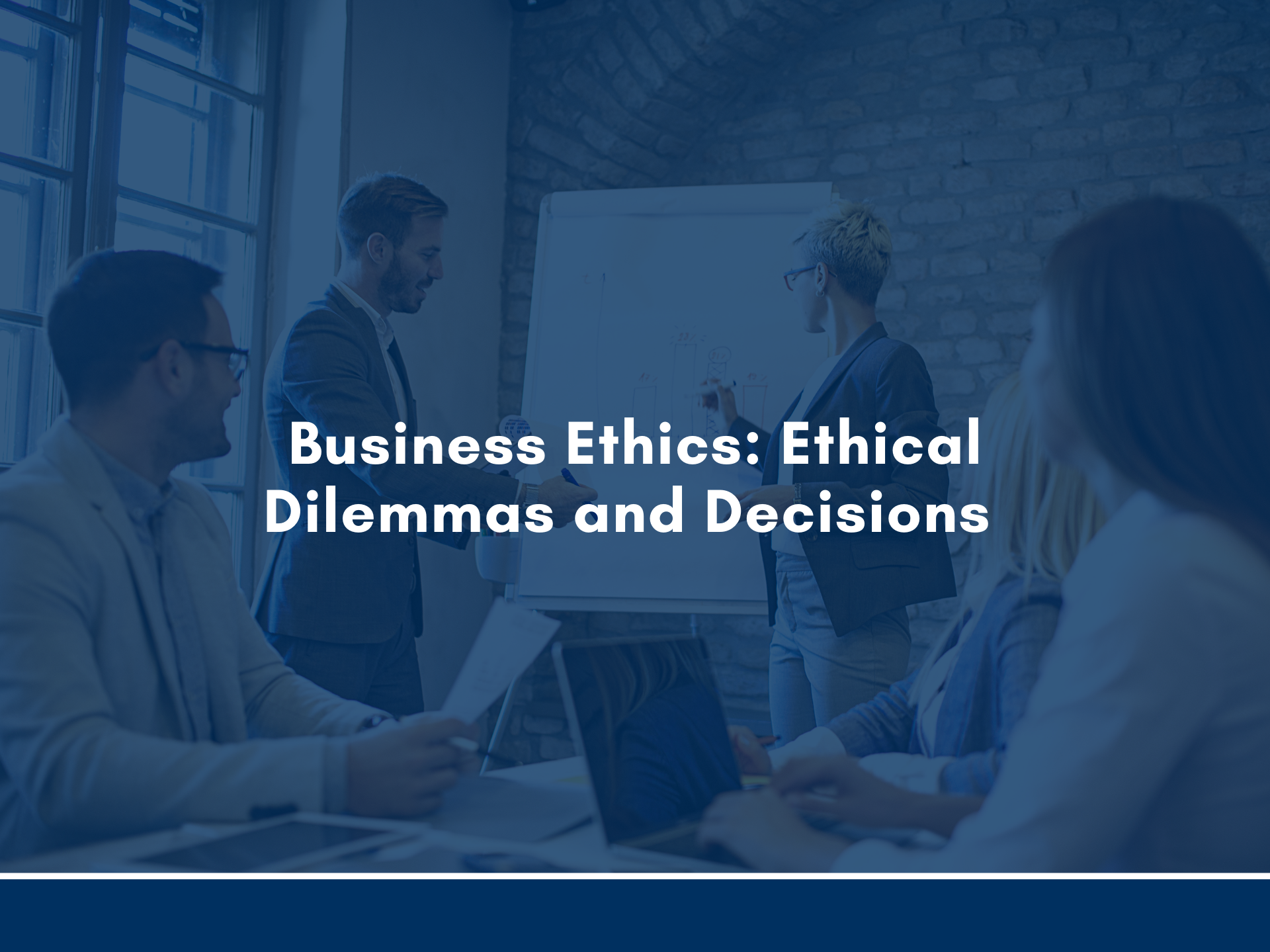 A Much-Talked About Topic! But What Exactly Do We Mean?

“Business ethics” is portrayed as a matter of resolving conflicts in which one option appears to be the clear choice. For example, an employee is faced with whether to lie, steal, cheat, abuse another, break terms of a contract, etc. However, ethical dilemmas faced by managers are often complex with no clear guidelines. Ethics are moral principles that guide one’s actions, while “business ethics” are ethics applied to business practices and decisions. Often the ethical choices are so obvious that we don’t think about them at all. We simply do what seems to be right. But sometimes competing or conflicting priorities may make the line of what is ethical and what is unethical very fuzzy.

Imagine you work at a company and a friend of yours is applying for a job there. How much help can you give to your friend before you cross the line? Certainly it wouldn’t be a problem if you could put a good word for them. Furthermore, you might tell your friend a little bit about the company policy and culture before they go for the first interview. However, how would you feel if you told your friend information about the Hiring Manager that is not publicly available to the other candidates? What if you told them about their favourite team or their red lines when it comes to how they would react in certain business scenarios? Even more, what if you had a strong “say” in the hiring process? Would that cross an ethical line? Needless to say that lying for your friend’s benefit would definitely cross a line. But, when does flattery actually become exaggeration and when does exaggeration actually become a lie?

As you can see “right or wrong” is not always “black or white”.

An ethical dilemma exists when one is faced with having to make a choice among alternatives. A significant ethical conflict arises when faced with a situation of conflicts of significant value among differing interests, have real alternatives that are equally justifiable, but with significant consequences on “stakeholders”.

According to the Journal of Business Ethics “Managing ethical behaviour is one of the most pervasive and complex problems facing business organisations today“.

When it comes to an “ethical dilemma”, a decision must be made between two or more ethically responsible courses of action, all of them being considered ethically appropriate, but each of them leading to a different outcome. This usually leads to weighing priorities against one another.

An example might be when a company whose sales are down needs to lay off some employees. But what’s the right way to go about it? The employees will probably want to get an early notice of termination and severance pay. This however, would come as an added expense to the company, when in fact it is already in an adverse financial situation. So, the company’s investors would reasonably prefer a more cost-effective solution. If the company did not already have an established employee termination policy for handling such a situation, it could easily face an ethical dilemma.

An ethical decision on the other hand involves choosing between ethically right and wrong options. Such decisions may seem to be easy to make. However, this may not be the case if for example there are strong incentives to make the wrong choice and there are perceived hardships in making the right one. It should be noted that sometimes people may have strong psychological ways and reasons for justifying their actions and these decisions can become powerful tests of one’s ethical integrity.

For example imagine that you are handling the online marketing for a small company and your boss wants you to get more customer positive reviews. He suggests that you should start writing your own reviews on popular message boards. Say you object, but he insists, telling you that it’s common practice for small businesses to do this sort of thing. You fear you might lose your job if you don’t comply, and you think to yourself that you are not really lying. You are just writing reviews for customers who didn’t have the time to do it themselves. And if it is common practice, what it the harm in doing it too… In this situation, the right ethical choice is clear, but other factors get in the way of following through on it. When a normally ethically responsible person makes a poor ethical choice like this, it’s called an ethical lapse.

“Ethical principles” are ethical values, establishing standards or rules that describe the kind of behaviour an ethical person should and should not engage in.

The following list of Ethical Principles incorporates the characteristics that most people associate with ethical behaviour.

So, ethics is in a lot of cases about individual choices. However, companies can encourage their people to act ethically by establishing the right culture and making sure that company policies place a high value on good ethics through say, a “Code of Conduct” or a written “Code of Ethics”. When managers and supervisors have the ethical integrity to lead by example, then ethical and good decision-making spreads throughout the entire organisation.

Businesses obviously exist to make money. But companies following an ethical corporate strategy understand that their responsibility is more than the bottom line. Their owners, employees and suppliers, customers and communities may all have differing and often opposing interests. So, sometimes, it is hard to tell what the best decision is. Companies are behaving as good corporate citizens when they consider their responsibilities to all stakeholders and act in ways that balance conflicting concerns.

On a final note, corporations and professional organisations, particularly licensing boards, will generally have a written “Code of Ethics” that governs standards of professional conduct expected of all in the field. It is important to note that “law” and “ethics” are not synonymous, nor are the “legal” and “ethical” courses of action in a given situation necessarily the same. Statutes and regulations passed by legislative bodies and administrative boards set forth the “law.”