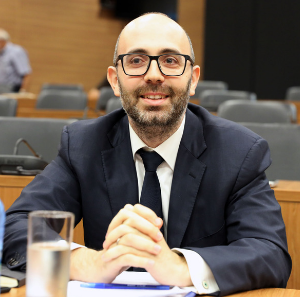 Following his doctoral studies, he held positions in the public and private sectors including Cyprus Airways (Head of Chairman’s Office and Non-Executive Board Member), the Secretariat of Cyprus Presidency of the Council of EU, the Embassy of Kuwait in Cyprus (Consultant to the Ambassador) and the Cyprus Cooperative Bank (Non-Executive Board Member – appointed by the Government approved by the Parliament and European Central Bank).

In between his professional appointments, Adonis Pegasiou was awarded post-doctoral research funding by the Research Promotion Foundation of the Republic of Cyprus to examine the ‘Europeanisation of Cyprus’s economy’. For the duration of the post-doctoral project, he was based at the EUC Research Centre (Cyprus) and was also a Visiting Fellow at the Hellenic Observatory of the LSE.

In addition, he has been involved in numerous research projects, published his work in various peer-reviewed journals and participated in numerous international conferences.

Moreover, he has taught at the European University Cyprus (EUC) (2014-2016) and has been an Adjunct Lecturer at the Department of Social and Political Sciences of the University of Cyprus since 2015.

Load more
We use cookies on our website to give you the most relevant experience by remembering your preferences and repeat visits. By clicking “Accept”, you consent to the use of ALL the cookies.
Cookie settingsACCEPT
Manage consent