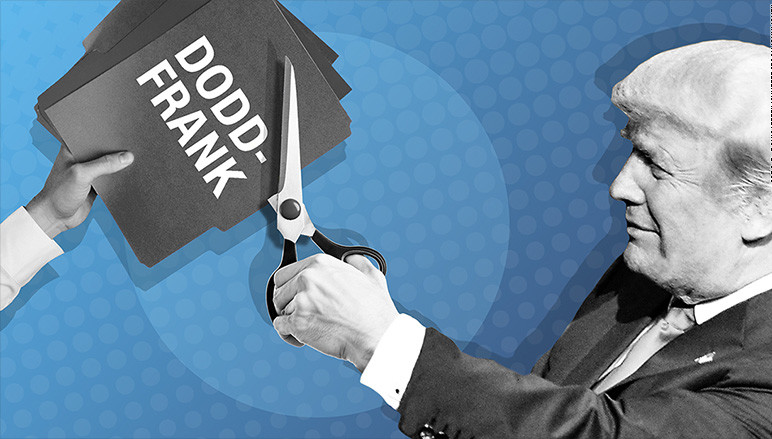 The US Senate has just passed a bill to rollback banking regulations put in place in the wake of the 2008 financial crisis.

The bill contains policies rolling back certain key parts from the Dodd-Frank Wall Street Reform and Consumer Protection Act. The bill would allow some smaller and mid-sized banks to omit their cash balances held at the Federal Reserve and other central banks when calculating their supplementary leverage ratio, or what determines how much capital they need to hold.

Among other things, the Dodd-Frank Act of 2010 (DFA) has decimated the CFD sector in the US, imposing the now familiar rules that led to the proliferation of the market in Europe, Asia, and offshore, leading to the huge expansion of the Retail FOREX sector in Cyprus and other EU jurisdictions.

Today’s rollback does not lead to a total recall of the DFA, especially the DFA’s provisions that affect the CFD sector, but it does show a Republican support of Trump’s promise to do a “big number” on the DFA; the new measure leaves important key aspects of the earlier law in place. Nonetheless, it amounts to a significant rollback of banking rules aimed at protecting US taxpayers from another financial crisis and future bailouts, and a change in the way this regulation is viewed by the US government following the change of guard.

The DFA was implemented by the previous government to ease the impact of the Credit Crunch on the US Economy, and to protect the market from any future crashes and crises.

Rick A. Fleming, the investor advocate at the SEC, summarised the impact of the crisis: “About four million families had lost their homes to foreclosure and another four and a half million had slipped into the foreclosure process or were seriously behind on their mortgage payments. Nearly $11tn in household wealth had vanished, with retirement accounts and life savings swept away.  Millions of Americans had lost their jobs, with unemployment peaking at about 10 percent in October 2009 and staying above 8 percent for three years. Stock values plunged, too, with the S&P 500 shedding 55 percent of its value between October 2007 and March 2009.”

It was in response to the above that the US Congress adopted the 800-page DFA in the summer of 2010, although by February of 2018 only about 72 percent of its rules had been written, while the law had drawn persistent opposition from the finance industry in multiple agency hearings and lawsuits.

Today’s bill, which passed 67 votes to 31, would free more than two dozen banks from the toughest regulatory scrutiny put in place after the 2008 global financial crisis. Banks with more than $50 billion in assets are untilnow considered “too big to fail” and are subject to the toughest regulations, including a yearly stress test to prove they could survive another period of economic turmoil. The Senate legislation, raises that threshold to $250 billion in assets, potentially allowing several high-profile financial institutions, including American Express and Barclays, to escape the extra regulatory scrutiny.

It is yet to be seen whether a further DFA repeal is in the works, as a strong Democrat opposition should be expected, especially in the high investment risk sector of retail CFDs, but this repeal will surely mean a decrease in Regulatory Risk for small to medium banks, increasing competition and expanding operations, a risk that to be fair has already been mitigated by the vast expansion of the FinTech industry, offering ready and tailor-made solutions to their regulatory and reporting obligations.

To learn about the Regulatory scene of the sector in Europe, we have an excellent 3-day course titled MiFID II/PRIIPs: Investor Protection, Product Governance and Promotion of Investment Products run by Dr Christina Livada, offering 15 CPD units