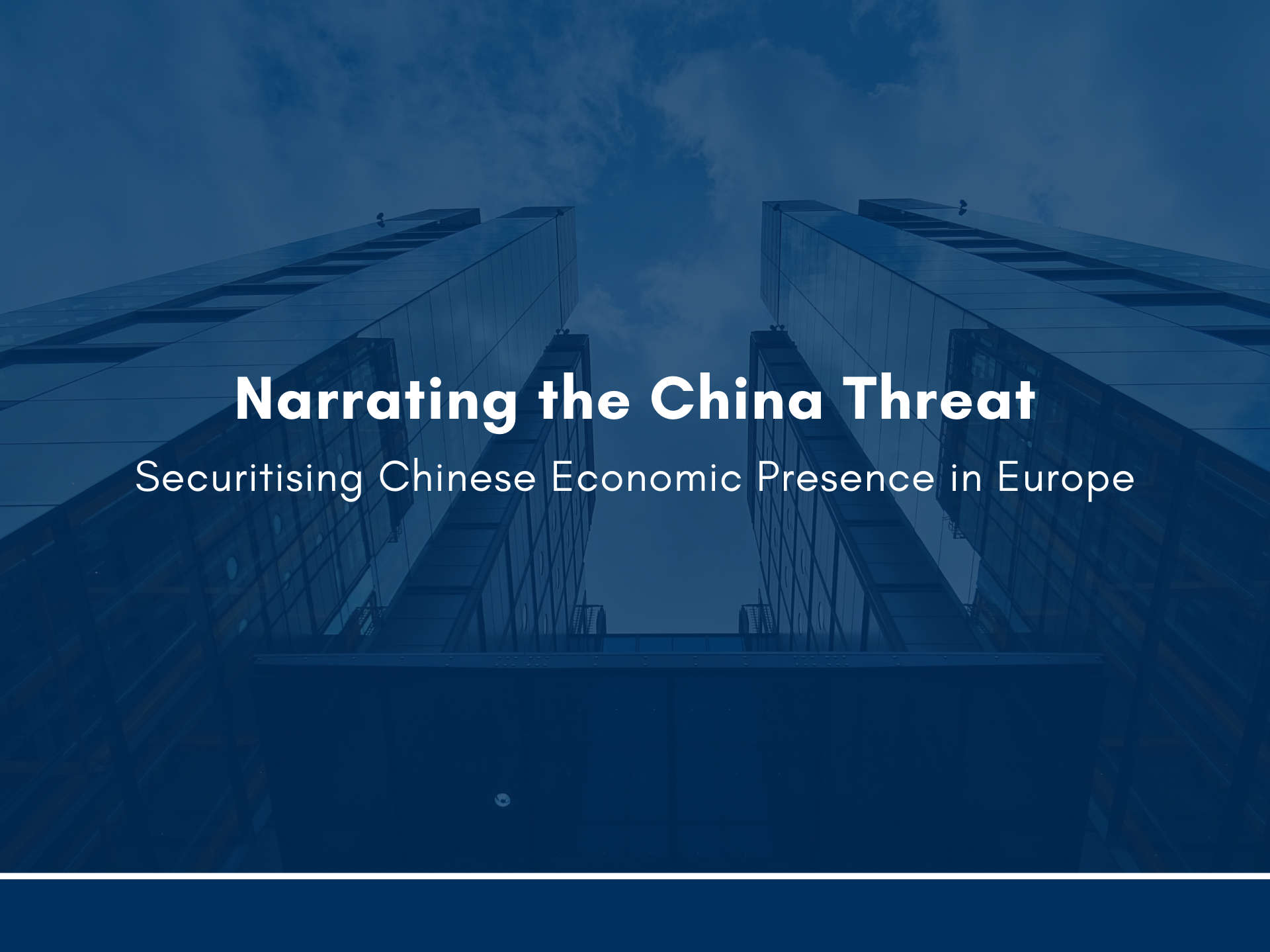 EIMF visiting faculty Researchers Konstantinos Tsimonis and Igor Rogelja (2020) have recently published an article “Narrating the China Threat: Securitising Chinese Economic Presence in Europe” in the Chinese Journal of International Politics (Link). In their study, Rogelja and Tsimonis analyse the process in which Chinese activities are being securitised in the EU.

This article responds to an emerging practice of securitising Chinese presence in Europe that increasingly defines the way European media, citizens, academics, and state officials perceive and speak about China’s expanding economic activities on the continent. This practice resembles the ‘China threat’ thesis in the US since the late 1980s, primarily concerned with national security and trade imbalances, and more recently in Australia, where the debate has centred on the corrupting influence of Chinese money in domestic politics.

At the forefront of securitisation in Europe, the two academics find think tanks advocating a narrative on Chinese presence not only as a challenge to the EU’s economic interests and diplomatic cohesion, but also as an existential threat to European unity and democracy. A recent report by two German think tanks, the Global Public Policy Institute (GPPi) and the Mercator Institute for Chinese Studies (MERICS), titled ‘Authoritarian Advance: Responding to China’s Growing Political Influence in Europe’, is the most comprehensive attempt so far to construct China as a threat, yet it is just one example of a broader trend towards the securitisation of Chinese presence in Europe. By employing the concept of security as a ‘speech act’, the authors argue that the construction of a China threat is based on the ontological criticism of the Chinese Communist Party’s (CCP)’s authoritarian regime that is used to cast a shadow of suspicion over the conduct of Chinese companies, associations, and citizens, as well as their European partners.

This European version of the ‘China Threat’ scenario is constituted by three discursive pillars identified in the reports examined: a) the politicisation of Chinese investments through a downgrading or denial of the decentralised decision-making agency of the Chinese and European actors involved; b) the notion that European unity is undermined over disagreement on how to engage China; and c) the othering of Chinese actors and their ‘enablers’ as agents of a hostile political, social, and economic order. These complementary pillars thoroughly politicise Chinese presence in Europe, thereby setting the conditions for the final securitising move: the framing of China as an existential threat requiring emergency measures on behalf of the EU.

In building their argument, the authors reviewed reports, policy briefs, articles, and other English-language literature by think tanks across Europe. To ensure selection from a pool of policy-relevant sources, they chose publications that had been routinely circulated to Members of the European Parliament (MEPs) through official parliamentary channels. The reports discussed vary significantly in their scope, severity, urgency, and language, but many share a securitising narrative directed at the various levels of executive power, from subnational levels to national and EU-level audiences. The aim was to examine how advice towards a major policy shift is being substantiated within the discursive space of European think tanks. The article intentionally focuses on analysing a purposefully sampled selection of reports that the authors identified as constructing a threat narrative. Among them, many exhibit the distinguishing rhetorical structure of securitisation as defined by Buzan, Waever, and de Wilde: ‘if the problem is not handled now it will be too late, and we will not exist to remedy our failure’. This tone of deliberate dramatisation is particularly prominent in the GPPi–MERICS report:

The securitising discursive tactics employed in some of the reports reveal a polemical attitude to an issue that requires a careful, fact-based analysis. When caught in the ‘China Threat’ frame, we cannot discuss how best to socialise third-country investors in the European business context and enforce compliance with EU norms and regulations. Instead, we end up tilting at windmills, and chasing dragons that do not exist. The result is not only a sacrifice of analytical depth, informed evaluation, and thorough identification of actual opportunities and challenges; exclusively assigning political motives to Sino-European interactions leads to the practice of wholesale securitisation of everything and everyone supportive of developments accompanying Chinese investment, namely, the companies, organisations, politicians, employees, scholars, students, and citizens that its proponents claim to protect.

EIMF has organized a free webinar with Dr. Tsimonis on April 14th at 4:00pm to discuss with the EIMF Academic Director, Adonis Pegasiou, the China’s Belt and Road Initiative (BRI).

Topic | China’s Belt and Road Initiative: Opportunity for Business or a Geopolitical Threat?

Please contact us should you need more information. A member of the EIMF team will contact you within 24 hours after submitting this form.